Known as the “City of Three Rivers” since the mighty Danube River is joined by both the Inn River and the Ilz River, Passau is a historic town who can trace their roots past the 2nd Century BC. First founded by the Celts and then a Roman town for 400 years, the city traded hands a few times.

The picturesque city is known for its Gothic and Italian Baroque architecture as well as its promenades, winding lanes and quaint Bavarian shops (expect to fall in love with a cuckoo-clock or two). It is also home to the historic St. Stephen’s Cathedral, which for most of its life housed the world’s largest cathedral organ (that honor now goes to a church in Downtown Los Angeles). Left undamaged during World War II, the Old Town was left as it has been for hundreds of years.

Of course, one of Passau’s top destinations and most recognizable sights is the Veste Oberhaus which lords over the Danube River and will unmistakably “announce” your arrival into port. Join AmaWaterways for a guided hike up to Passau’s “Castle Hill” and enjoy the panoramic views of the Old Town and rivers below.

Nestled atop the St. Georgsberg Mountain, and nearly 350 feet above sea level, the Veste Oberhaus was originally built in 1219 by Ulrich II (the first Prince-Bishop but 34th Bishop of Passau). Like other castles and fortresses built along the Danube, the Veste Oberhaus was built to express the strength of the town and make those who might think of invading wish to reconsider.

Attacked five times between 1250-1482 (two of these times, the attackers were Passau locals who were rebelling against the bishop), the Veste Oberhaus was finally forced to surrender in the 18th century. Because of its many renovations over the centuries, some come here to study ancient fortification techniques.

Its most notable inhabitant is Napoleon Bonaparte who used the fortress in his campaign to take Austria. Not long after, and for almost a hundred years, the Veste Oberhaus was a state and military prison, feared as the “Bastille of Bavaria.”

Guests can playfully imagine this as their “Escape from Alcatraz” moment, hiking up and down the steep terrain. Remnants of a fortress wall line a footpath hikers use to tread up (or down), and along the way are various gateways and guard houses.

While there is also a city-run bus in Passau that takes tourists and locals up to the fortress (except for the winter season), making the hike with AmaWaterways will surely be a highlight of your trip and let you enjoy the views all along the way!

Be sure to look out for the Veste Niederhaus on the hill below. Built after the Veste Oberhaus, it served as a smaller second fortress. Today, the Veste Oberhaus is home to a museum (known as the Oberhausmuseum), an art gallery, a viewing platform, a youth hostel, a restaurant and a pre-World War II amphitheater, which has a history of its own. 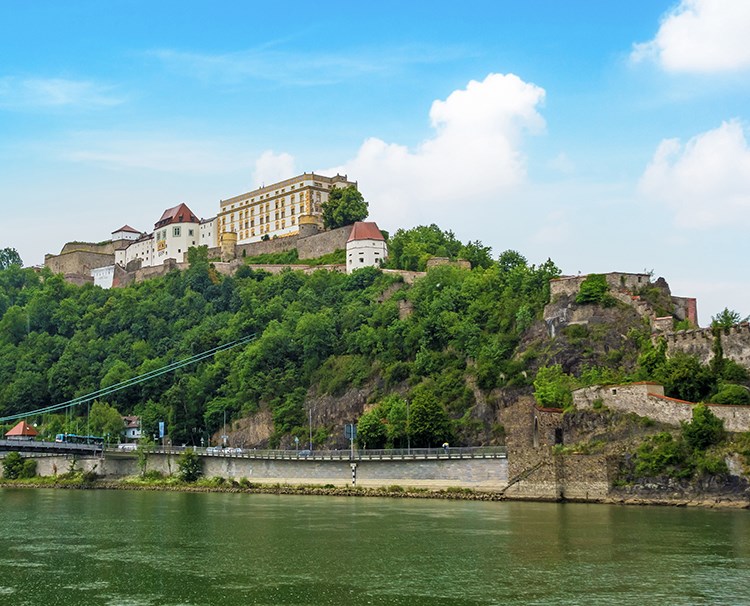 ” RIVER CRUISING CAN TAKE YOU THERE”

Insider’s tip: Best time for river cruising where its less expensive and overcrowded is Spring time and Fall.

This site uses Akismet to reduce spam. Learn how your comment data is processed.